Chesapeake Film Festival Encore
Winner of the 2017 award for Best Narrative Feature, Swing Away will be this year's closing night film. 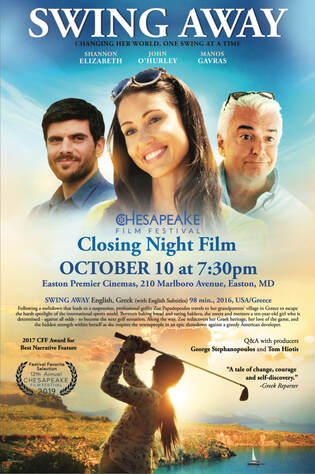 The film had its official cast and crew premiere in Athens on Monday, May 13th.

The film will show at the London Greek Film Festival on Friday, May 17th at 9pm.

The film is finally coming home to where it was created! There will be a special screening of the movie at the Rodon Theater in Rhodes Town on Friday, August 24th, 2018 at 9pm. Tickets available on a first come first served basis and are available on site.
Actors Manos Gavras and Renos Haralambidis will be on hand for the screening, as will Producer Tom Hiotis.
DVD NOW AVAILABLE
The film is now officially available to purchase on DVD. You can find it right now on Amazon.
Special features include the trailer, deleted scenes and behind the scenes featurettes.

Interview with Director Michael A. Nickles

The One Way Ticket Show Podcast

New Write Up from "That Moment In"

'Swing Away': A yipped putt, a Greek philosopher's assist and a story of redemption

Huffington Post Article Discusses the Philosophy Behind the Title

'SWING AWAY' Mantra for Living with Meaning

A Review from the Hellenic Professional Mentoring Initiative

Swing Away: A Review

An In-Depth Interview with Swing Away Creator and Producer George E. Stephanopoulos

SWING AWAY, Coming Soon to a Theater Your Way

Smashing Interviews Gets to the Core of O'Hurley's Performance

Excellent Print and Audio Interview with our own John O'Hurley

One on One with John O'Hurley

John O'Hurley Takes His Golf Talents to the Big Screen

Director Michael Achilles Nickles was honored with the Veteran's Award at the Cyprus International Film Festival! Congratulations to Michael!

Radio Interview with John O'Hurley of "Swing Away"

Can "Swing Away" Break Through at Box Office?

'SWING AWAY' MOVIE: A LOVE AFFAIR WITH GREECE

FILM SWING AWAY ABOUT HEART, SOUL, GOING FOR IT: STEPHANOPOULOS, NICKLES REFLECT ON THE INSPIRATION